How and when did frogs start to hop? 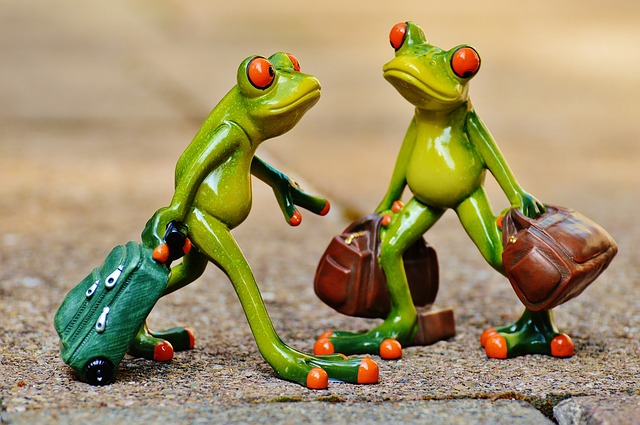 “Now this story cannot go on like this, we have to stop and give it an end,” said the elderly frog in their weekly council meeting.

All the wise and knowledgeable members of the frog council gathered around a small fire they had set up to keep them warm for the night. There was a mild cold breeze over the lake which caused small ripples on it. It was a new moon day and the place filled with frogs croaking noise. They were furious about the snakes’ menace. They had lost their near and dear ones in huge numbers.

The elderly frogs were frantically walking in circles, trying to think of a solution. After a lot of shouting and croaking, they agreed that they needed external help. Someone outside their clan who can give a fresh new idea to counter this threat. But who could that someone be?

Then slowly, a hand came up from the rear seating where the general crowd was allowed to sit and watch a council meeting. Elderly frog pointed out to that hand and said: “Go on.” A well-built frog with strong arms and legs stood up. The council members could hardly see his face with the light from the fire. “Gentleman can you identify yourselves before you give your opinion.”

“Well, sir,” hesitated the voice. “This is Faith.” As soon as he said the name, there was a lot of giggling in the crowd and cross-talking within them.

“SILENCE,” said the elderly frog. “Go on Faith,” he said.

“Ahem, ahem” Faith cleared his throat and was about to talk. He heard someone in the crowd say, “Huh, blind Faith helping us.”  That sank his heart. He bit his lips for a moment and his voice started to tremble.

He mustered some courage and ignored the comment. He said, “elder councils, while I was hunting for my dinner yesterday. I heard an owl hoot to his friend about a peacock living up in the mountain, giving out wise advice. The owl said he had issues seeing in bright light. The peacock had advised the owl to stay awake in the night. The owl admitted that it can now see better in the nights.”

“Hmmm,” the elderly frog thought for a moment. “Guess the peacock has the wisdom, we should probably seek his help. Now, how do we find him.”

Before the elderly frog could continue, Faith stopped him and said, “Yes, I am blind. I want to prove my value here. Having blind faith amongst you makes a difference in every one of you.  But I am not going to go alone. I want to take my friend Destiny along with me.”

The crowd burst into laughter. “Who the dumb destiny?” shouted someone.

“Yes, my dearest friend Destiny” would come along with me said Faith in a bold tone. Elderly frog trying to contain a smile and asked, “now where is Destiny in the crowd.”

As many tried to locate Destiny, one of them shouted “There he is” pointing to a small little shrub. There stood a frog who was all green in color with lean legs and arms. Standing on his two legs, pointing his fingers towards the star. “Hey, dumb destiny!” A voice called out from the crowd. Destiny turns around in anger and shouts back “Do not call me dumb, ok?”

“What are you doing?” shouted someone from the crowd.

“Well I am trying to count the number of stars and I am unable to go beyond 18”. “See here; I can count 8 using my fingers and ten from my toes. Can you come here and help me with your toes and fingers so I can go beyond 18?”

Faith smiled and said, “Destiny, I will help you. But now Destiny we have a job to do. Will you help me?” Destiny agreed to Faith without any hesitation.

So Destiny and Faith set out to walk into the deep jungles in search of the wise peacock. It was the rainy season in this part of the world, so the path was slippery. Destiny was Faith”s eye by walking in front with a stick on his shoulder which Faith will hold on. The walk got challenging as the day progressed. At one point, Faith stumbled upon a small rock and fell on his head. He hurt himself very badly. “Destiny I think we will have to make a decision now. You need to carry on.”

“Do not worry about me; I will be fine. I will wait for you here and on your return, we can go back”.

“But do you think I can get the help on my own, I am dumb.” Said Destiny.

“No, you are not I have faith in you; this is your chance to prove the world Destiny is here to stay and show it”s might.”

That words from Faith gave Destiny fresh energy. He held his head high and continued the walk. After a long walk, he finally reaches the destination. There was a large crowd of animals gathered around a banyan tree. Everyone was so excited and they were cheering. As the cheering got louder, a handsome peacock with very long well-groomed feathers flew from the sides and landed on the tree”s branch. He was smiling and waving to the crowd.

The crowd got ecstatic as he waved to them.  Then with a booming voice, he said “Hope… my friends, hope is today’s word. HOPE. H O P E …” “Repeat after me… HOPE .. HOPE…”  and the crowd starts to shout back “HOPE” “HOPE.” The whole place was echoing the word HOPE.

Destiny was awestruck with all this. He watched with a gaping mouth and then he says to himself. “Yes, that is it. Hope is our answer. The word “Hope” is our answer. He wanted to go back to Faith and convey this quickly. He finally reaches Faith. And proudly announced to him, “Yes, I saw the peacock and got our solution.” Faith smiled back and said, “Yes, I know you will get it, my friend, now tell me what the solution is.”

Destiny tries to think hard now. Suddenly they hear a small rustling sound from the bushes behind them. And it was slowly getting louder. It sounded as though something was moving closer to them.

“Oh No,” screamed both of them.

“Now what do we do, Destiny tell me what the word is?” asked Faith frantically.

Destiny started panicking “It sounds like mop … and I think .. I think .. it starts with an H”…

“HOP” screamed both of them. They both sat down on their strong hind legs and pushed it firmly towards the ground. They just took off like a rocket. They covered a long distance that by the time the snake reached their spot. They were long gone.

Destiny and Faith after hopping for long and having escaped from the snake were laughing with excitement. They were so happy that they met the peacock and got this wisdom. They wanted to spread this word to everyone in their pond. And Faith let Destiny enlighten their inmates about how “Hopping” is the solution to their problem. They were all happy and excited to hop. The pond frogs praised faith in their heart and followed destiny!

The word spread about the success of what hopping did to the frogs and how peacock helped it. It reached Peacock”s ears when he was doing a discourse in Australia. And he said “HOP my friends .. HOP….” to a mob of Kangaroos.